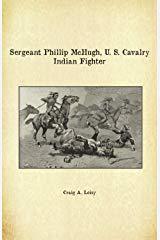 This is a biography of Sergeant Phillip McHugh, a veteran Indian fighter and career regular Army cavalryman serving on the frontier before and after the Civil War. McHugh was my great-great- great uncle on my father's side. When my father died, McHugh's cavalry sabre, a photograph of his sister Kate and a 3-inch newspaper clipping of his obituary were passed down to me. I was surprised to learn that my ancestor was a private in L troop of Custer's cavalry regiment at the Battle of the Little Bighorn River in present-day Montana (1876). McHugh survived on Reno Hill during that desperate fight. The iconic battle has been the subject of many books and films. It was only after I found a fuller newspaper obituary in McHugh's service record at the National Archives that I decided to write this biography. He was an ordinary man caught up in extraordinary times. There are dozens of biographies of the generals but almost nothing about the soldiers who actually did all of the fighting – and much of it hand-to-hand. It was the soldiers, not the generals, who won or lost the battles of the Civil War and the Indian Wars in the Old West.

This biography traces the life of Sergeant Phillip McHugh beginning with his immigration from Donegal, Ireland in 1855. He was just 16 years of age and he travelled by himself. His family sent him by sailing ship to America to escape the famine caused resulting from years of potato blight. Initially, he lived with relatives in eastern Pennsylvania and worked two years at a coal mine. In 1857, at 18 years old, McHugh joined the regular Army at the cavalry recruiting center near Harrisburg (Carlisle Barracks). He was assigned to the new Second Calvary Regiment and sent, as a replacement, to Fort Belknap in Texas to help protect settlers from the Comanche. McHugh was wounded twice in his first engagement with the Comanche at the Battle of Wichita Village (1858). He also participated in the Battle at Crooked Creek (1859) and the Battle at Pease River (1859) with a force of Texas Rangers. After Texas voted to secede from the Union in 1861, McHugh and his regiment evacuated by steamship from Indianola. He remained with the Second Cavalry, renamed the Fifth Cavalry, at the outset of the Civil War and participated in the Peninsula Campaign in northern Virginia. McHugh was captured during the Battle of White Oak Swamp (1862) and sent to Libby Prison in Richmond. He was released in a prisoner exchange after three months and, in 1863, enlisted as a sergeant in the First District of Columbia Volunteer Cavalry Regiment. He participated in the sieges of Petersburg and Richmond. After the Civil War concluded, McHugh reenlisted in the Fifth Cavalry and was assigned to reconstruction duties in South Carolina for almost three years (1866-1868). His regiment was ordered to Fort Harker in Kansas to protect the construction crews building the transcontinental railroad. McHugh fought the Sioux and Northern Cheyenne in the Engagement at Beaver Creek (1868). The regiment's chief scout was Buffalo Bill Cody. McHugh enlisted in the Seventh Cavalry at Fort Leavenworth, Kansas and was assigned to Troop L. McHugh was charged with being drunk and disrespectful to an officer at camp near the Republican River but a court martial panel at Fort Leavenworth subsequently found him not guilty.

McHugh was ordered to reconstruction duties in the South again during 1871-1873. The Seventh Cavalry was then sent to Fort Abraham Lincoln near Bismarck in the Dakota Territory. McHugh participated in the Stanley Expedition (1873) to protect surveyors for the Northern Pacific Railroad and, the following year, was part of the Black Hills Expedition (1874). The biggest engagement that McHugh fought was the Battle of the Little Bighorn River (1876). He was a member of the Dakota Column, which primarily consisted of all twelve companies of the Seventh Cavalry. The Dakota Column along with two other columns, was attempting to surround the Sioux warriors, defeat them and send the survivors to live at agencies. At the midday halt on June 25, just hours before the hostilities commenced, McHugh was one of six privates selected from each company to reinforce Company B which was escorting the 175-mule pack train transporting the regiment's rations, forage and spare ammunition. This act saved his life because McHugh's Company L was massacred later that day along with four other companies in a battalion under the direct command of Col. Custer. The surviving cavalrymen of the Seventh held off an overwhelming force of Sioux and Cheyenne during the hill top fight (Reno Hill). McHugh's last fighting with hostile indians while a member of the Seventh Cavalry was in the Nez Perce War. He participated in the Battle at Canyon Creek (1877). McHugh's final two enlistments were in the Eighth Cavalry posted in Texas and, later, assigned to the Dakota Territory once again. He retired as a sergeant in 1889 at Fort Meade in present-day South Dakota then resided in Allentown, Pennsylvania with his widowed sister Kate until he died in 1910. Sergeant McHugh had a career as an Indian fighter that spanned more than 30 years. Over that period, he fought the Comanche (Texas, Indian Territories), Cheyenne (Kansas), Sioux (Montana Territory) and Nez Perce (Wyoming Territory). He was wounded twice. He also fought in the Civil War (Virginia) and performed reconstruction duties against the Ku Klux Klan (South Carolina). During the Civil War, he was captured and interned in the notorious Libby Prison but ultimately paroled and freed during a prisoner exchange.