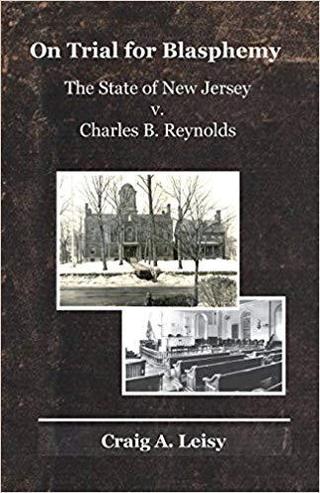 Act I
Outside courthouse: before trial
Scene I
Reporter introduces herself and previews trial

A young woman is leaning against a tree some distance from the courthouse smoking a cigarette. She has long red hair loosely pushed up on top of her head. She is wearing a blue skirt with a white blouse buttoned at the neck and boots to make her appear taller. She is watching the townspeople arrive early to get seats inside. It is a hot day with no breeze and the women have brought fans to stir the air in the stuffy confines of the courthouse. The Morris County courthouse is a two-story brick building built in 1827.

Reporter [to audience]: Hello, my name is Gertrude Morrison. You can call me Gertie. I'm a reporter for The New York Times. I'm in Morristown, New Jersey, about thirty miles from Gotham - that's New York City for you country fold [smiles]. Some people think that I can be too opinionated just because I know my mind. Well, I'm not - that's my opinion [smirks]. It's Thursday, May 19, 1887. Then trial begins at 11:00 a.m. today in the Court of Common Pleas for Morris County. I've been a reporter at the Times almost three years now. it hasn't always been easy working in a man's world. My editor felt even an opinionated female reporter could handle this assignment [sarcastic]. It's ironic, because as a woman, I can't even serve on the jury for this trial. Now, that sounds like a lot of humbug to me! [she pulls a flask from her handbag but quickly puts it back] Too bad there's no time to sneak a sip of apple brandy to get me through this silly trial. The trial begins in five minutes. It's already hot and it promises to be very stuffy in the crowded courtroom -especially since I had to get all slicked up. I'll allow that I may not be a perfect lady in all respects but you can't act like a proper lady in this job or you'll be assigned to the society pages reporting on women's fashions and matrimonial vows. If you want to be successful in a man's world you have to act like a man. Well, I better get some interviews done right off the reel so I have something to send my editor this afternoon.