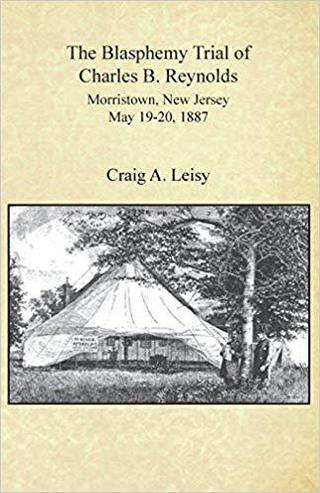 This is an account of the blasphemy trial of Charles B. Reynolds, a travelling freethought lecturer, in Morristown, New Jersey. Even though the trial occurred in 1887, the story is as fresh as today's headlines. The trial explored the fundamental conflicts in society between secularists and religionists. It was the only blasphemy trial in New Jersey state history. The New Jersey blasphemy trial was a prelude to the Monkey Trial of 1925 with the famous defense attorney Clarence Darrow. Darrow was a great admirer of Colonel Robert G. Ingersoll who served as the defense attorney in the New Jersey blasphemy trial. Both men were outspoken agnostics and both sought to place religion on trial in place of their clients. The popular play, Inherit the Wind (1955) by Jerome Lawrence and Robert E. Lee, was inspired by the events in the Monkey Trial.

This trial pitted the First Amendment guarantee of free speech against the right of religious freedom. The attorney for the defendant, Col. Robert G. Ingersoll, was famous as an orator and an outspoken freethought proponent. Even though local sentiment was overwhelmingly against his client, the townspeople greatly respected and admired the Civil War veteran. The defendant, Charles B. Reynolds, was a freethought lecturer traveling from town to town preaching the separation between church and state. Ironically, Reynolds was a former First Day Adventist minister who lost his religion and Ingersoll was the son of a minister. Society in America, both before and after the Civil War, was very unsettled. For example, some religions had divided (Southern Methodist, Southern Baptist) over the issue of slavery and even the state of Virginia had split (West Virginia). The carnage from the bloody battles of the Civil War caused many to lose their religious beliefs and some joined secular movements like the American Secular Union and the National Liberal League. There were chapters in many cities and towns throughout America. Both Reynolds and Ingersoll were part of the leadership of the American Secular Union.

This book combines a biography of Charles R. Reynolds with a history of the American freethought (secular) movement of the nineteenth century then culminates with a detailed account of the proceedings of the blasphemy trial. The book is unique in that the story is told using the actual words of the participants taken from newspaper accounts and especially The Truth Seeker and other freethought periodicals. There is no other book-length, comprehensive account of Reynolds and his trial. The book concludes with a big picture assessment of the significance of the blasphemy trial on society in America.